It’s usually me and old ladies at the market on any given day of the week. I wouldn’t mind, aside from the fact that they’re pretty fierce and like to elbow their way up to the front.

Not being from one region in particular, (a rarity in such a cuisine-specific country) the Zongzi is a tamale-like concoction that every Chinese person has eaten in his/her life.  As much as turkey is a part of Thanksgiving in the states, Zongzi are a huge part of the Chinese holiday Dragon Boat Festival, in early June.  Common lore tells varied stories, all involving a famous poet drowning himself (some stories are for love, some for political sacrifice), and the village people throwing packets of rice into the river to keep the fish from eating his body.  To celebrate the holiday, wrapping and eating these Zongzi’s are common tradition, and glutinous rice is stuffed into hearty bamboo leaves, and filled with either savory or sweet goods.  Nowadays Zongzi can be found at all times of year, everywhere from the streets, to supermarket freezers, to dim sum restaurants.

In Yangshuo we came across an elderly woman rolling a cart of Zongzi down the street.  I’ve had plenty of Zongzi of the homemade and supermarket and dimsum variety, but have yet to taste the smaller, always-steaming street variety. Mild in all senses- texture, flavor, temperature- it turned out to be a very satisfying midday snack.  I bet if I were hungry I’d surely wolf a few of these down. 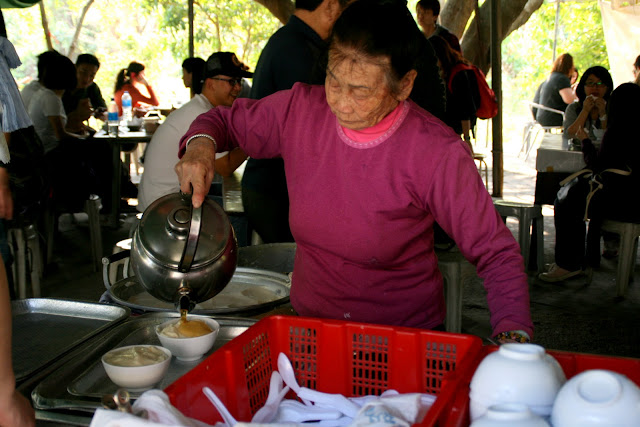 There is no way to eloquently translate this into English, although I suppose ‘Tofu Flower Lady’ certainly does not rank among the most terrible translations I’ve heard, not by far.

As I mentioned before, we hiked up to the Lamma Island wind turbine through less-traversed back-roads, and so on the way down we decided to cruise along the large, main road.  Towards the bottom were several rest points, where in America would probably just be a drinking fountain and maybe, just maybe, a port-a-potty, but here in Asia nestled a canopy of food stations.  What do I call this, it’s not street food, so…trail food…?

Anyway, always pulled between whether to stop and eat or to keep going (a lifelong struggle, I swear), I just had to stop when I saw this old woman serving up bowls of Douhua (豆花). 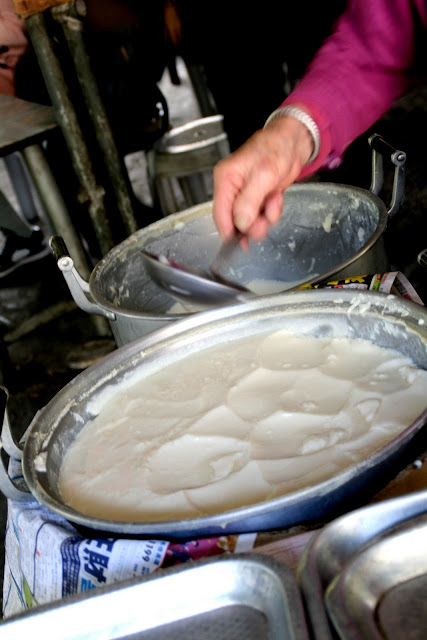 Among the few traditional Chinese desserts is douhua, or doufuhua, which directly translates into ‘tofu flower’.  A simpler dessert could not have been thought up, as douhua is made with scoops of ultra-soft tofu, coated with a ginger (or plain cane sugar) syrup.  Sometimes, to kick it up a few notches, some will add peanuts or redbeans or any number of garnishes.  Growing up I think I had it plenty of bowl-fulls of douhua with lotus nuts.  But real douhua, the authentic street kind, is usually consumed in a cheap china bowl with nothing but sweet gingery syrup poured over the top. 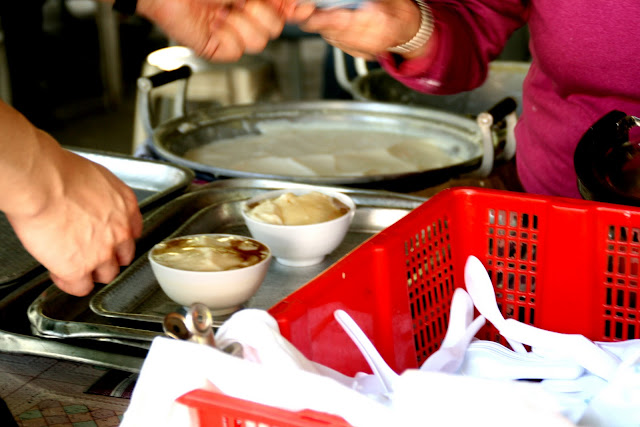 Traditionally douhua is served cold during the summer, and warm during the winter.  At Lamma Island, we had the option to choose, and after a long day of hiking through an island what do you think we opted for? 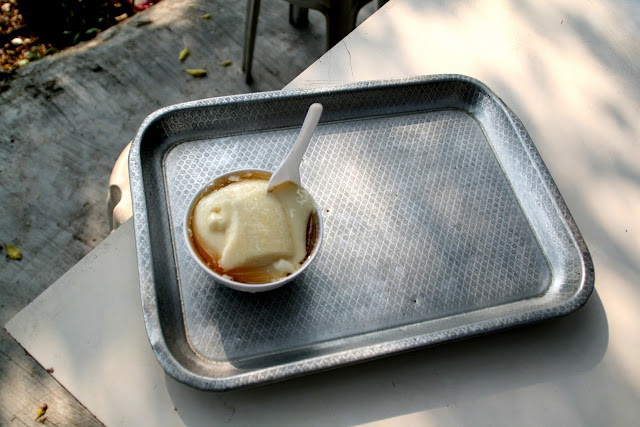 I love this stuff because it goes down so smooth, and has the amazing ability to cool (or warm) you from the insides.  I also love it for its simplicity, for its sweetness, and for the lack of effort one needs (no chewing necessary) to down the entire bowl! 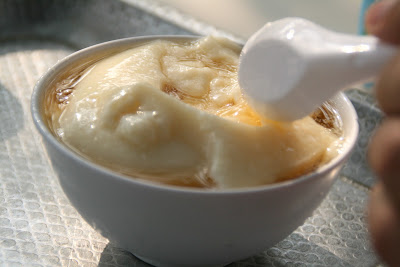 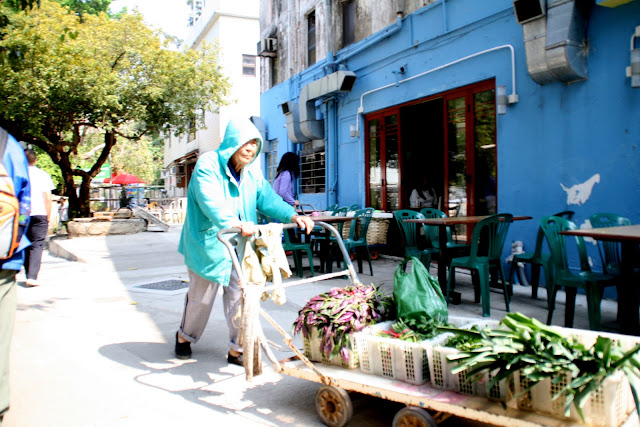 I’ll include a more substantial of a post on Lamma Island tomorrow, but for now, here’s a sneak peak of the sleepy island culture we observed over the weekend.  It’s amazing to think this lush, jungle-like fisherman’s island is just a ferry-away from Hong Kong. 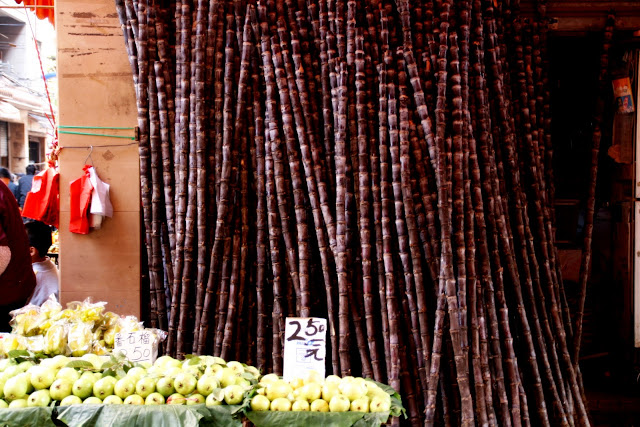 Sugar Cane is a big treat in China, and many other asian countries as well.  Look how big this stuff is- like edible bamboo stalks.

Most of the time it’s sold, on the street, off of a cart.  The vendor will hack you off a stick about a foot long, and using a small machete that looks like a rasp, he will shave off the hard, outer bark leaving you with the soft, sweet, yellowish-white flesh.  But it’s not just to be eaten- sugar cane flesh is veiny and fibrous, and you chew a bite as you would a stick of gum, spitting out the stringy fibers (usually on the side of the road).

Now that it’s cold I’ve seen the sugar cane vendors retreat back into their homes and stores, but when the weather is warm there is fresh sugar cane on every corner, off of each metro exit.  The other day I spotted this lone sugar cane vendor parked amidst a sea of white vans.  Nobody craves sugar canes in chilly weather.  She didn’t look too thrilled… 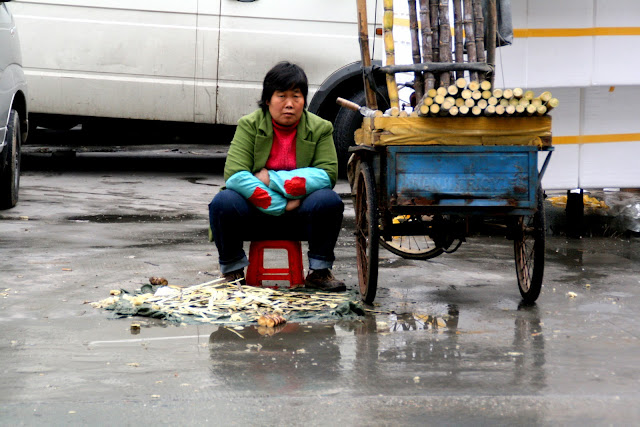 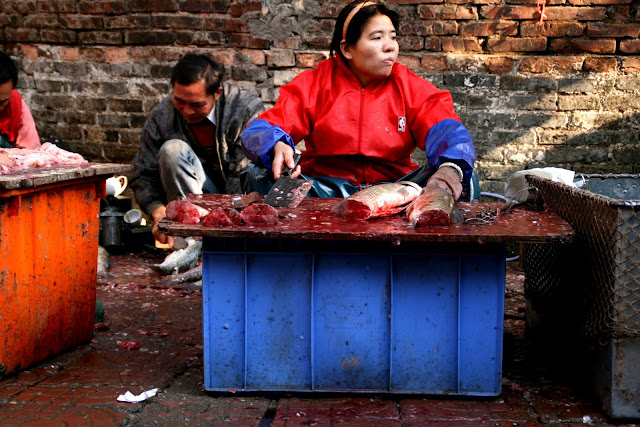