Visit the original version of this article over at Honest Cooking

I wish I could say we explored all of Mexico City by foot in the one week we were there. I wish I could say I ate at hotspots like Pujol or Izote and visited amazing markets like this one, or went into the home of an abuela and learned to make mole. sigh.

I wish I could have attended an amazing wedding.

Despite staying in a posh, hotel-ridden neighborhood, the DiploMan and I were, of course, most drawn to the least decorated strip of Polanco’s center which housed a fruit market and neighboring hole-in-the-wall taquerias. Rather “underdeveloped” in comparison to its fellow restaurants and bars in the area. And lest I forget to mention yet again, that Coffee Bean down the street.

After recovering from a flu that left me, so frustratingly, without an appetite for the first three days I was in town, I was finally feeling well enough to stomach my pre-ordained craving for tacos. Under a glowing azure overhang, as we approached the rotisserie on the sidewalk that skewered a chunk of al pastor meat, looked past the open griddle and taco counter, I knew we were in the right place when I spotted a small cluster of formica fold-out tables and flimsy plastic school chairs.

I don’t know if it’s living in China that’s changed this perception, but those formica tabletops really did set off some nerve  in my brain, alerting my food memory banks for the potential of a great meal to be had. Though Polanco’s posh hotels, well-dressed women in heels and beautiful architectural gems had quite the appeal, THIS is what had enticed me about Mexico, this is what I had been waiting for since we landed.

When I spotted the takeout tacos in trays waiting to go out to hungry customers and caught a whiff of the spicy meat and fragrant onions, I knew for certain we were in the right place.

Kitchen in the front and seating in the back is a layout often seen in small hole-in-the-wall eateries abroad, where Health Inspection does not reign supreme. It’s a change of pace that is quite welcome in my book, for the displayed kitchen serves as a demo booth for the heart and soul of the menu.

Clearly, the heart and soul of this ‘restaurant’ was tacos. Tacos with chicken, tacos with al pastor, tacos with steak, with cheese, without cheese, so many options for tacos!!! Equipped with a griddle, two chopping stations and an antiquated cash register, the presumed brother and sister duo took orders (her) and cooked tacos (him) with automated frenzy. Many of their customers ate their orders perched on the narrow wooden “bar” across from the griddle, others took their tacos to go, with many a taco quickly disappearing as soon as they stepped onto the street.

A few clientele, mostly off-shift workers from neighboring restaurants and old Mexican men who seemed to be reminiscing of their youth over several bottles of beer each (and us), chose to sit in the rear of the restaurant, at the aforementioned cluster of formica tables.

Posted on the wall were large, bright cardstock that acted as menus, in addition to flimsy laminated and bound menus that were informally distributed to the table. Foregoing what was put in front of us, the DiploMan and I, along with the rest of my family, were mostly drawn to the bright orange display featuring the Orden de Tacos, five tacos of our choosing for $33 pesos (about $2.50USD). With cheese, a modest $53 ($4USD).

A revelation was had when I asked about the Campechanos, a mix of chorizo and steak. Consider my mind blown.

In total, the five of us splurged on five Orden de Tacos along with an order of Birria- all supplemented by the homemade green and red salsas, a bottomless supply of limes, and a large bowl of chopped onion and cilantro.

The tacos arrived at the table, double corn tortillas generously piled with seasoned meat and cheese, one piled atop the other barely accommodated on a regular-sized plate. Our orders of tacos con queso were topped with a griddle-melted pile of Mexican cheese, which was not unlike a less-salty version of Mozzarella. The issue of cheese on tacos, commonly referred to as Gringo style, is an area that is often left wanting in my dining experiences. These tacos certainly did not disappoint nor were they wanting, and if anything there was- dare I say it- too much cheese (!!). Then the Birria arrived, an oily, fragrant stew of mystery meat (lamb? veal?) waiting to be stuffed into their own little tortilla pockets, a lovely milder, warm, and soupy counterpart to the tacos.

What ensued was what often happens when simple, good food is placed in front of individuals- a chorus of munching and grunts of approval, the swapping of plates and exchanging of tacos (one chorizo/steak for one pollo? Deal.), some swooning and even rolling of eyes from delight, and definitely minimal conversation. If they hadn’t known it before, as I surely had, this was definitely a meal that we had all been waiting for.

We miss Mexican food a lot here. It’s like they say, you never know what you have until it’s gone- and growing up in California, where there are no shortage of tacos and burritos and hot dogs wrapped in bacon (those are Mexican, aren’t they?), we’re suffering a bit here. Not to mention, I would kill for an elote from Cafe Habana right now (plenty of fresh corn at the market- but no cojito cheese for miles!)

When the recent issue of Saveur magazine rolled around, with it’s tantalizing cover of crispy tacos and bold text boasting “Secrets of Mexican Cooking”, I was determined to find a recipe that I could recreate, or at least adapt, here in Southern China. After all, I find there to be many similarities in Asian and Latin cooking- there wasn’t that huge Asian Fusion spike in the 90′s for nothing, let me tell you…

But I soon realized that most authentic Mexican recipes call for very specific dried or fresh chiles, or the need for good tortillas- none of which I are available here. I toyed with the idea of substituting local chinese dried chilies in place of the New Mexico or Guajilo chiles. Though excellent and powerful in Chinese cuisine, I doubt they would garner the same savory Mexican flavor I am craving (would they? Does anyone know?). Perhaps my trip to Mexico City in the summer will be just as much a pantry expedition as it will a reunion with friends…

In the meantime, I’m still seeking out some good recipes and some good tricks to recreate the flavors of Mexican cuisine in my own kitchen. This weekend I made this shredded chicken taco dish again, an easy adaptation for a Guangzhou kitchen. Looking through a huge list of recently bookmarked Cinco de Mayo themed recipes, I re-discovered the website Muy Bueno Cookbook along with this recipe for a mango salad, reminiscent of the chile sprinkled mango and jicama sold from carts on the street corners in downtown LA.  Rather than a chunky salad, I preferred to scale it down to a salsa, and with magoes and cucumbers both sold prolifically at the wet market, it was a no-brainer. The recipe called for plenty of chile powder in the salad, but I wanted a more nuanced spice in this salsa, and so also grabbed from the piles of mild peppers at the market.

Growing up, I would frequently sit on a stool in the kitchen as I watched my mother cook in the kitchen.  She would educate me as she went along on the importance of cleaning up as she cooked, setting things out before she started stir frying, and making sure to wash the dishes as she went along. At the time, I thought she was just being nitpicky, and franky hated these “lectures” I got when all I wanted was to watch the garlic and ginger sizzle at the bottom of the skillet. But I now realize that she was simply teaching me the basics of what all good chefs know- setting your mise en place, making sure your workstation is sanitary and organized. Funny how everything your mom tells you when you are little suddenly makes sense when you’re older…

She also showed me other important skills, one being how to wield a knife. My mother could (and still can) pulverize garlic into the tiniest minced flecks, slice ginger into the thinnest slivers, and artfully cut carrots and firm tofu into perfectly-square little cubes. The Chinese believe that the proportion of shapes and sizes of a dishes’ components play a big part in the flavor and taste of a dish. Hence, the Chinese have an extensive vocabulary for the prep work of different cuts of meat and vegetables- significantly more than their Western friends.

Whenever I’m prepping a dish like this salsa, spending much longer than anyone typically would to make sure the shallots are appropriately, I compare them to how my mom used to do it. When people make salsa and their tomatoes are cut into huge, uneven chunks, the onions are in unappetizingly large pieces, and the cilantro is not even chopped, I am a little uneasy. Maybe you’d say I was spoiled- I’d say I was taught well. In any case, I’d consider this a secret to a good salsa, or a salad, or any freshly chopped mixed vegetable dish.

inspired by this recipe from Muy Bueno Cookbook 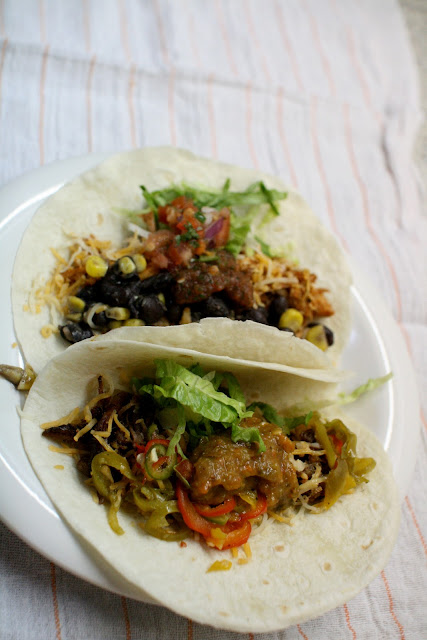 Though I rant and rave about New York eats, I am a Californian tried and true.  Which means until adulthood,  I had no idea the rest of the world did not have avocado trees growing in their neighbors’ backyards, and that in many cities Tacos were a mystical part of food lore.  Coming to China I knew I would crave many a “Western” food, and craving Mexican food has not fallen short of that expectation.

Before the Chinese New Year holiday, we had a bunch of friends from the DiploMan’s work over for a celebration of sorts, for which he boasted I would make tacos.  Yes, tacos, on the eve of Chinese New Year.  We’re not exactly the most culturally appropriate of people on this one, I suppose… In any case, the day before I scoured the city for ingredients, and did the best I could to come up with everything except for tomatillos and jalapenos.  And, until next time, packaged tortillas would have to do.  How much do you expect a girl to do in the kitchen at once!!?

Thanks to a good friend, I was already provided with a great roasted pork butt recipe, perfect for taco-filling.  Not being a fan of the ground beef taco thing (plus it’s hard to find good ground beef here in China), I opted for a shredded chicken recipe as well.  Referencing one of my favorite websites to dig up the perfect recipe, even without all of the exact ingredients I’d say the party was a success!  And now, without further ado, are the two recipes I used: 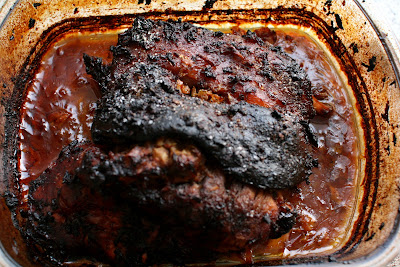 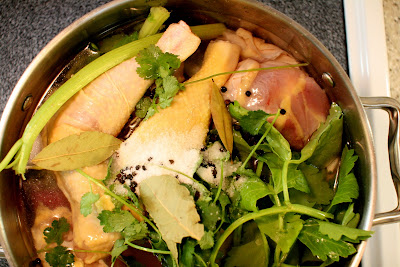 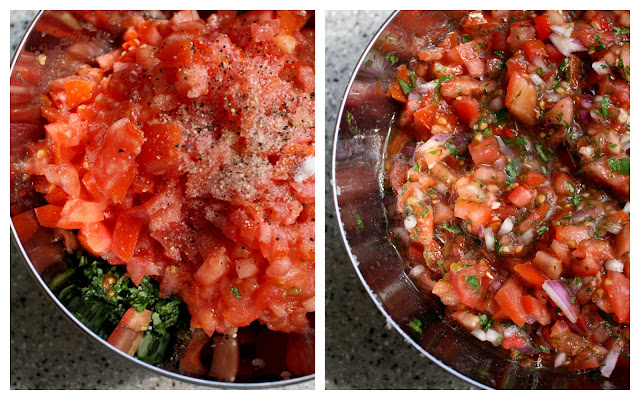 What’s a taco without salsa?  Here’s a few recipes for three great, easy salsas: a red, a green, and a pico de gallo. 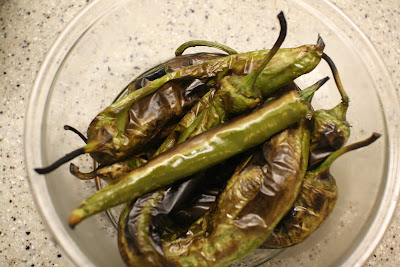