Remember, on my first day in town, how I went to the goat races and when writing the post mentioned there were few major events in town? I wasn’t absolutely sure why at the time, but I’ve since realized how monumental a feat a big event like the Goat Races are around here. Limited resources, unreliable vendors, pricy negotiations, and inefficient ways of operating all attribute to the fact that any event involving more than ten people that starts and ends can be considered a success. The 5k Breast Cancer Race for the Cure was held in town this past Sunday, hosted by the local Susan G. Komen Foundation affiliate, the Tanzania Breast Cancer Foundation. There were definitely more than ten people at the race, which started and ended too, so according to my metrics, a success it was! (To be serious, 2011 was the last year a race was held, so it’s further proof that these events don’t organize themselves.) The most appealing part about this walk for me – aside for the cause, of course – was definitely not the fact that my alarm woke me up at 6am. Rather, and one of the main reasons I decided to participate, was because it was a great way to see parts of downtown- or as they call it here, ‘city center’. Parts of Dar that I might otherwise may not ever see. I’ve touched on the levels of petty crime here before, so I’m not going into it today. But I mention it only because it’s for this very reason that I would not typically spend my mornings meandering through city center, certainly not with a camera in hand, and most certainly would not be able to let my curious eyes wander as freely as they did yesterday.

The race began and ended at the Ocean Road Cancer institute (view the race route here), the leading (and only) place to seek post-surgical treatment for cancer patients in the whole of Dar es Salaam. Some patients travel as far as 1300km by bus just to get a few rounds of radiotherapy- and some don’t even have enough money to return home afterwards. The esteemed Ocean Road Cancer Institute is one of the older buildings in city center, built in the late 19th century when Dar was still under colonial rule. Very much reminding me of a California-style mission, the building was originally built as the Ocean Road Hospital, a government-sponsored institution almost exclusively treating Europeans. And, such is exemplary of Dar es Salaam’s often biased and extremely layered colonial history. My favorite part of the walk was soon after we started, when we passed by the Kigamboni fish market. Crowds of locals, many who were just beginning their day at the fish market/ferry terminal/major bus stop lined the streets to watch us pass, eyeing our groups with great bewilderment and amazement. Some took photos with their phones, and we took photos right back. We swung around the bay and along the southern peninsula of Dar es Salaam, where walking along Kivukoni front where we passed a series of old German colonial buildings along the waterfront- my first time viewing many of these old colonial buildings that I had long heard or read about. The crowds of Tanzanians grew smaller after we left the crowded waterfront area, but throughout the race route curious locals still gathered to observe this curious event. I’m sure it’s not everyday they are able to see masses of Wazungu, or foreigner, walking through their streets- escorted by a police band, at that! The band was my favorite addition to the walk, and certainly made the day feel more a Tanzanian affair than anything else. Public events here always seem to be celebrated with great passion, with loud music and constant dancing, and this very American ‘Race for the Cure’ was done in no lesser fashion.

Urban graffiti, you’ve got some competition.

On our trip to Kaiping last week we took a tour a cluster of small villages, named the MaJianglong （马降龙）cluster.

Kaiping is well-known in China for the wave of emigrants that exited China in the early 20th century. By the 1920’s and 1930’s, many of the villagers had fled to the appeals of America, Cananda, and Australia for a better life. It is now jokingly- but accurately- said that there are more villagers from Kaiping living outside of the city than in the city itself. In the early turn of the century, those that traveled to the West for hopes of a better life continued to support their families back at home- their meager salaries in the Western world translated into monthly and yearly funds in the villages.

As word spread of these villagers slowly accumulating loot from their Western family members, bandit attacks become more common and more threatening in many villages. As a result, villagers came together to build concrete structures to protect themselves from these attacks, called Diaolou （碉楼）, which directly translates into rock-cave housing.

Today it’s a Unesco World Heritage site, and tourists come to stroll around the stone buildings, bike along the Greenway, and pay 10RMB to walk up a diaolou structure. It’s a pretty neat site to see the village, although I much preferred biking around than the 10rmb entrance fee up what seemed like a dilapidated old army barrack. 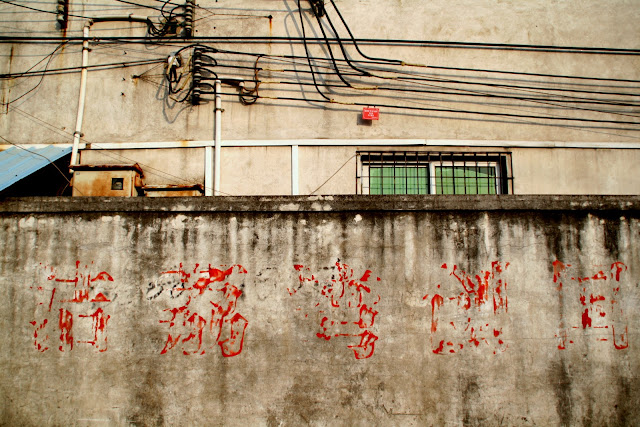